At first glance, water supply seems to be the least of Canada’s problems. It is, after all, home to 60% of all the world’s lakes (with 31,000-plus lakes within its borders), and 9% of the country’s land area is covered in freshwater.

Perhaps this abundance in H2O is precisely why citizens are using up water at such an alarming rate. Sana Ahmed, in a 2011 article for The Weather Network, wrote that Canada has become one of the most water-guzzling countries in the world:

Canadians waste a significant amount of water each day. We might think of ourselves as having conservationist attitudes, but studies show otherwise. In fact, most Canadians aren’t aware that our water supply isn’t limitless.

Bob Sandford, of the Canadian Partnership Initiative of the United Nations International Water for Life Decade, finds that alarming. According to Environment Canada, each individual Canadian uses up to 350 litres of water per day, per capita. That may sound surprising, but a five-minute shower with a standard shower head uses 100 litres of water, and a single load of laundry can use up to 225 litres.

Canada is second only to the United States in terms of water consumption.

“The reality is that on average Canadians use … double what is used on average in European countries,” Sandford says, adding Canadians’ waste of water is “scandalous.”

If these trends continue, it won’t be long before water shortage becomes a real concern in the country. Fortunately, simple steps like getting water-efficient plumbing in Saskatoon homes can help prevent this scenario. Those who want to help the nation save water should look into these upgrades: 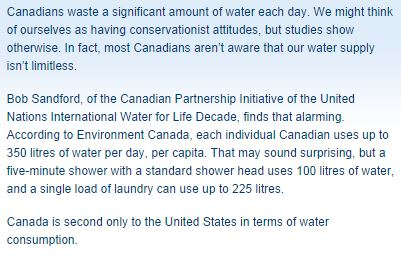 Pressure-Reducing Valves
One of the reasons why households use so much water is that there’s too much of it flowing through their pipes. In fact, a water pressure of about 35 PSI (pounds per square inch) is adequate for most homes, but many use 70 PSI or greater. Have expert Saskatoon plumbers inspect your water pressure and ask if you need to install a pressure-reducing valve to drop the flow rate to more sensible levels.

Low-Volume Toilets
Toilets are among the most used plumbing fixtures in the home, and they also happen to be some of the most water-hungry. If you’re using a toilet, each flush sends about three gallons of water down the drain. To save water—and to lower your utility bills, as well—replace your current toilet with one that uses only 1.6 gallons or less per flush.

Performance Showerheads
The next time you take a shower, consider this: standard showerheads release about 2.5 gallons of water per minute. Fortunately, performance showerheads can reduce usage by up to 30%, releasing just 1.75 gallons per minute.

(Source: How Canadians take water for granted, The Weather Network)