Keeping Saskatchewan’s supply of drinking water 100 percent clean isn’t easy, and some cities in the province are, in fact, faring badly with that task. According to Alex Coop of Estevan Mercury, Estevan’s water supply currently has had greater than normal levels of trihalomethane or THM since 2008. This is despite the fact that the city has implemented a number of water filtration methods over the past decade designed to prevent such chemicals from being pumped into people’s homes: 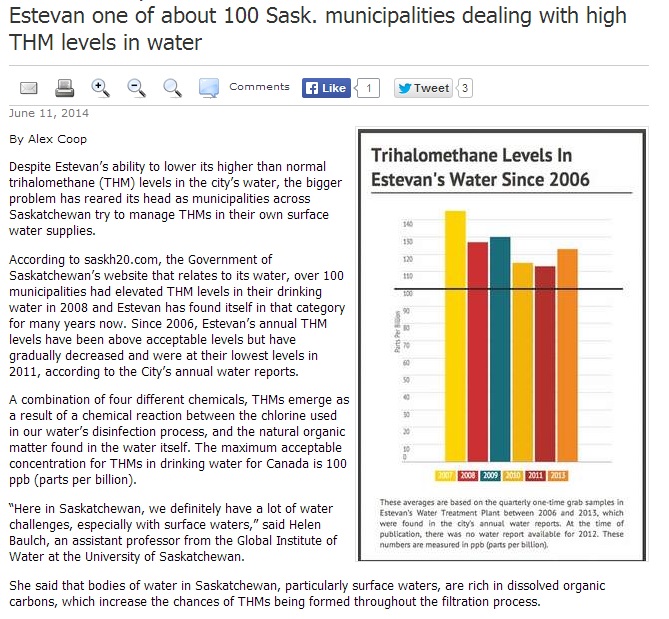 “Here in Saskatchewan, we definitely have a lot of water challenges, especially with surface waters,” said Helen Baulch, an assistant professor from the Global Institute of Water at the University of Saskatchewan.

She said that bodies of water in Saskatchewan, particularly surface waters, are rich in dissolved organic carbons, which increase the chances of THMs being formed throughout the filtration process.

These pieces of organic matter can range from flooded vegetation, to an annual transfer from another water body that enters the surface water we draw from, said Dr. Lalita Bharadwaj, an associate professor from the School of Public Health at the U of S.

While these chemicals are found in virtually every source of drinking water in the country, Health Canada considers THMs to be a possible carcinogen. That said, THMs are only really dangerous in excessive amounts, and households can protect themselves with water treatment services, as provided by reliable Saskatoon plumbing companies, like Perfection Plumbing & Drain Cleaning. Ironically, it is the quest for safe, clean water that also caused the proliferation of THMs in Canada’s water supply in the first place.

THMs are actually by-products of chlorine or bromine disinfection, which is used to eliminate pathogens in the water to make it safe for human consumption. Other by-products include chlorite, believed to cause anemia among infants, and trichloroacetic acid, which can also cause cancer. At present, it is believed that THMs can only cause health problems if they go beyond the recommended 10 parts per billion (pbb) level typically found in commercially-sold drinking water. While they’re naturally-occurring chemicals, THMs are also manufactured on an industrial-scale as refrigerants and solvents.

An experienced plumber in Saskatoon can help protect households from THM contamination by installing a reverse osmosis system in their water supply. These systems can’t completely eliminate THMs by themselves, but their carbon filters surely can. A four-stage system is particularly reliable, since the chemicals are sieved through four different types of filters and membranes.