One of the most common plumbing problems that you’ll likely encounter, either at your home or place of business, is a clogged water pipe. This can happen to anyone, and for a good number of possible reasons.

In fact, as far back as November 2013, groups like the Municipal Enforcement Sewer Use Group (MESUG) have been asking the government to be stricter in regulating “flushable” wipes. According to a report in CBC News, sewer experts claimed that the term “flushable” was a misnomer, and these wipes had been costing the city government around $250 million every year on sewer clean ups. 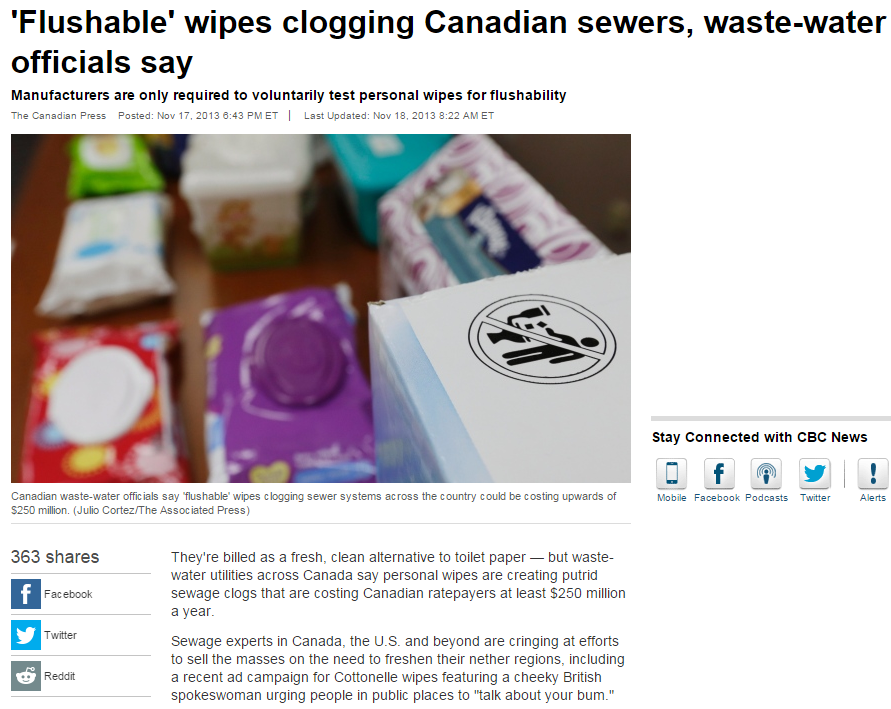 While those products and personal wipes may swirl down the toilet with ease, experts say they don’t disintegrate, creating serious problems as they work their way through aging sewage systems on their way to treatment plants.

“If we don’t deal with this problem, the Canadian taxpayer will be literally flushing away millions,” said Barry Orr, a waste-water official with MESUG.

This should serve as a reminder to be careful about what you flush down the loo. Aside from used wipes, plumbing blockages in Canada are also caused by used diapers, cigarette butts, and leftover cooking oil.

Additionally, schedule routine plumbing services in your home for pipe maintenance, even when you think there’s nothing wrong with your plumbing system. Saskatchewan residents can rely on companies that provide drain cleaning in Saskatoon, Martensville, and Warman, like Perfection Plumbing & Drain Cleaning.

It will also help to conduct regular pipe inspections on your own. For example, if your toilet appears clogged, open the toilet tank (assuming that your toilet model has it) and observe what happens when you push the flush lever. If the water in the tank doesn’t sink, it could mean a few things. For one, you may be getting insufficient water pressure. It’s also possible that the flush lever is defective to begin with, and is not moving the arm inside the toilet tank as it should. Of course, it could also indicate that your pipes are clogged.

This problem need to be taken seriously. Plumbing blockages, particularly those caused by “flushable” wipes and similar products, don’t just result in faulty plumbing systems. They can also lead to health problems for you and the community, as wastewater can mix with your neighborhood’s water supply. The costs involved in getting professional Saskatoon drain cleaning services early enough are surely worth the prevention of an even bigger problem.

Our Priority is the Health and Safety of our community! Following recommendations from local authorities, we will be mainly focused on providing essential services at this time. We will still be booking non-essential calls for later dates. Please contact us with any questions at info@perfectionplumbing.ca. Click the learn more button to find out what we are doing to prevent community spread of this virus. Thank you for your continued support and stay safe!DismissLearn More